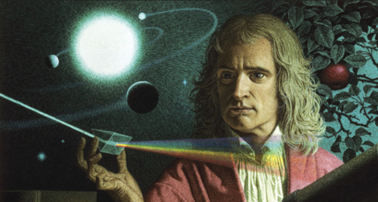 When the queen of England knighted Sir Isaac Newton, it was the first time a scientist was honored this way. He was a brilliant scholar with a wide range of interests: from mathematics to natural philosophy, from the laws of motion to the laws of gravity, from the study of optics to the study of theology.

His first series of lectures at Trinity College, Cambridge, was on optics. Other scientists had begun the scientific revolution, and the study of light was a central theme. Newton made significant contributions to the scientific understanding of white light and color. He even built the first reflecting telescope.

Light is a fascinating topic, and because of its significance, Jesus used it as a metaphor for himself when he made the statement in John 8:12, “I AM the light of the world.”  There are at least five reasons why light is important, and these factors provide insight as to what the Lord was saying.

First, light is essential for vision. Have you ever noticed as the sun goes down late in the day, shadows grow darker, and it’s more difficult to see? If the moon and the stars aren’t in the night sky, by the time it’s pitch black you see nothing.

Light is also essential for color. As the light dims, colors fade. For this reason, light is a necessary ingredient for beauty in the world.

Third, the earth’s food chain depends on light. Photosynthesis is the process whereby plants use the energy of light to produce food. In other words, without light, there is no life.

It’s also worth noting that for a lot of people, light is a key element of happiness. Many studies have shown higher levels of depression where there is less natural light. This seems to be true for some who work indoors, as well as for those who live in areas where there are seasonally shorter days.

One more observation is that light can drive away fear. When our son was five years old, we’d put him to bed at night, singing a song and praying with him before turning out the light. In a few minutes, we’d hear him yelling, “There’s a wolf!”

“Yes, there is. Would you leave the light on?”

When the light was on, he could see, so he wasn’t afraid. But in the dark, his imagination slipped into high gear, and he was afraid.

The impact when Jesus comes into a person’s life is similar to light in the natural world. He opens our eyes, giving us vision. He adds color and beauty to our lives. He brings life and happiness, and drives away fear. Our Creator already knew what Sir Isaac Newton and other scientists took years to figure out, because he created light.

In Matthew 5:14, he who is the Light of the World turns to his disciples and in a stunning plot twist tells them, and us, “You are the light of the world.” We are called to be Christ to our world. The effect of our interacting with people and the planet should add vision, beauty, life, and happiness. And, wherever there’s a Christian presence, there should be less fear.

In the same way God sent his son into the world not to condemn, but to save, he sends us into the world with the same mission. When we represent the Lord the way he hopes we will, that’s when the church is at its best, becomes most productive, remains relevant, and changes the world.