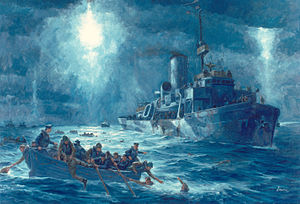 Fifty-five minutes past midnight on February 3, 1943 the USS Dorchester was on its way to Greenland with more than nine hundred men on board. Captain Hans Danielsen, aware that German U-boats were in the area, had ordered the men to stay ready and keep their life jackets on, but many of them disobeyed the order because the life jackets were uncomfortable and impossible to sleep in.

Four Army chaplains were on the ship: a Methodist minister, a Jewish rabbi, a Catholic priest, and a Reformed Church pastor. All four had been Boy Scouts. All four were brand new lieutenants in the Army. All four were ready to serve their Soldiers, their country, and their God. All four were prepared to give their lives if necessary.

When the torpedo hit the ship, the lights went out. A lot of people died instantly; more died in the water. Others were injured. Men who were trapped below began to panic, looking for their life jacket, trying to find a way to the top deck so they could abandon ship.

As soon as the chaos began, the four chaplains sprang into action. They encouraged panic-stricken young men, guided Soldiers towards the upper deck and to the lifeboats, and helped them find life jackets. When there were no more life preservers to be found, they took off their own and gave them away in order to save the lives of a few more men, knowing that it certainly meant they themselves would die.

Two hundred thirty men made it into the rescue boats that night. As they looked back at the sinking ship, they saw the four chaplains standing on deck, arms linked, praying and singing in Hebrew, Latin, and English.

If Ecclesiastes 3:1 is true and there is an appropriate time and season for every purpose under heaven, and if different times and seasons call for different actions, then how we live, how we behave, what is appropriate, or what is best, may be more a matter of discernment than following rules. There is a time to shout and a time to whisper, a time to drop the bomb and a time to lay down the weapon, a time to wear the life jacket, and a time to give it away so another may live.

An immoral man behaves inappropriately for selfish reasons. A moral man does what is right because of legal, humanitarian, or religious obligations. A hero rejects selfishness, takes his moral obligations into account, then discerns with artistic altruism a course of action that will benefit another human being, even when that act may bring harm to himself. That’s what love does. That’s what genuine spirituality aims for. That’s what Jesus had in mind when he said, “There is no greater love than to lay down one’s life for one’s friends” (John 15:13).

Most societies pay tribute to their heroes, and the four chaplains of the Dorchester are heroes who deserve that honor. They could have lived longer, ministering for many more years, making a difference, perhaps for thousands of people. Yet, discerning the time and the season, they chose to whisper, “I love you.” They decided to take off their life jackets. “Here, take mine.” They loved the men they ministered to, knowing it certainly meant they would die, and in making that decision, they painted a magnificent work of art.